ALOHA, ALL!!  Thoughts and prayers are with all HDR readers on the East coast preparing for Hurricane Sandy.  Let’s hope the storm won’t be as bad as anticipated.  The Weather Channel has live hurricane coverage:

And yes, it could affect the election.  How Hurricane Sandy Could Seriously Disrupt The Election

Ask these guys about the storm

But there’s another storm that’s getting very little hype, and it hits on November 6.  Check out these endorsements coming in for Romney:

But it’s not just one newspaper in Iowa – it’s FOUR!!

No big deal, you say?  Who cares about endorsements anyhow – do they really sway voters?  I tend to agree with you….not such a big deal except that The Des Moines Register hasn’t endorsed a Republican in 40 years.  And the Chicago Daily Herald is…well…in Chicago.  And they endorsed Obama in 2008.  Here’s why they went with Romney:

“In endorsing Illinois’ favorite son in 2008, we declared Obama “has a chance to be a great president.” We said, “He offers a new kind of politics. A politics that breaks down the old partisan walls. A politics that strives to bring people together. A politics of hope.”…But four years later, where is the hope? Where is the confident swagger and leadership to uplift the nation’s mood?…[W]e endorse Romney because he, unlike Obama, understands that jobs are a creation of business, not of government. And that to encourage job growth, we need policies that incent business to grow and provide it with a stable environment for that growth.  In the end, we need moderation, not ideology, to facilitate an economic recovery. It is the central issue that affects us all.”

Polls are moving in Romney’s direction.  Big Time.  Tight Polls, Looming Storm Shake Campaigns  “Romney held a 4-point edge, at 50-46, among likely voters in Sunday’s Gallup daily tracking poll. In the tracking survey from conservative pollster Rasmussen, Romney topped Obama 50-47. A Washington Post/ABC News tracking poll, though, showed a statistical dead heat, with Romney up 49-48.”  And Gallup Finds Republicans Outnumber Democrats  “Based on surveys conducted from October 1 through 24, Gallup finds that 36% of likely voters call themselves Republicans, compared with 35% who are Democrats. If leaners are included, the GOP advantage is 49%/46%.”

There could always be an October surprise.  Dick Morris explains the impact they’ve had in the past:

Libya storm grows.  Hillary Asked For More Security In Benghazi, Obama Said No  “It is possible that Clinton’s legal counsel may have revealed this story to various sources, in hopes of protecting her reputation. Reports also indicate that former President Bill Clinton has urged his wife to release State Department documents “that prove she called for additional security at the compound in Libya.” Those same, unconfirmed reports indicate Obama will almost certainly lose the election if those documents are released.”

It gets better (actually, worse).  AC-130U Gunship Was On-Scene In Benghazi, Obama Admin Refused To Let It Fire “The AC-130U is a very effective third-generation fire-support aircraft, capable of continuous and extremely accurate fire onto multiple targets. It has been used numerous times in Iraq and Afghanistan to save pinned-down allied forces, and has even been credited with the surrender of the Taliban city of Kunduz.”

What about General Ham?  (Shaka to Carl)  Did General Ham Become Another Victim For Trying To Save Americans In Benghazi?  “A rumor is circulating that General Ham moved to defy orders to try and save the lives of the Americans in Benghazi and was immediately relieved of duty. General Ham immediately had a rapid response unit ready and communicated to the Pentagon that he had a unit ready. General Ham then received the order to stand down. His response was that he was going to help anyhow.”

Then there’s this (Shaka to Tom):  US General Arrested For Activating Special Forces Teams  “Africom commanding officer U.S. General Carter Ham, after being ordered to essentially surrender control of the situation to alleged Al Queda terrorists and let Americans on the ground die, made the unilateral decision to ignore orders from the Secretary of Defense and activated special operations teams at his disposal for immediate deployment to the area. According to reports, once the General went rogue he was arrested within minutes by his second in command and relieved of duty.”  Of course, the General can’t say anything….at least not yet.

They’re not afraid to speak out.  Special Ops heroes on Obama:  Leaks, Lies, Libya…Lack of Leadership.

GOD BLESS AMERICA – PASS THIS ON – REMEMBER IN 8 DAYS!!

ALOHA, ALL!!  So what can we expect in the final debate between Barack Obama and Mitt Romney?  Since the focus of this match will be foreign policy, Obama will be grasping at straws….anything…to make it seem like he’s been a formidable leader of the free world.  Another epic fail.  Dick Morris published what he called a “Roadmap for Monday’s Debate.”  It could be titled a “Roadmap of Obama’s Foreign Policy Failures.”  To wit:

There is a temptation to get lost in the weeds of when Obama recognized that the Libya attack was, indeed, an act of terror. But the key point is that Obama treated the video as a provocation for the attack as if they had a moral equivalency. Otherwise, why constantly mention the video in the same breath as the attack? Why run an ad apologizing for the video in Pakistan? Why address the video in his U.N. speech? It may be a bridge too far to convince people that Obama was engaged in a cover-up for political purposes trying to convince people there was no premeditated terror attack. But surely there is no good reason for lumping the attack and video together. It’s like saying “he murdered this guy but only after the guy called him a dirty word.”

But, beyond the specifics of Libya, a 2011 national survey by Pat Caddell and John McLaughlin provides the key lines of attack Romney should follow in the foreign policy debate coming up on Monday.

• Obama’s outreach to the Muslim world has decreased our national security. 30% believe it has increased our security and 47% feel it has decreased it. Romney should attack Obama for naïveté in his dealing with the Arab world and for not seizing and holding the moral high ground but instead seeking to understand the other guy and give him the benefit of the doubt.

• Romney should stress that Obama’s policy toward Iran will not stop it from developing nuclear weapons. By 77-10 voters agree that they will not stop Iran. Asked what he would do, he should say that he will support Israel if she has to take military action against Iran. He should say that he does not believe we need to commit US soldiers or aircraft but that we should provide Israel with the ordinance they need to destroy the Iranian missile sites. If Obama says this could lead to a general war, Romney should say that a strong posture does not cause wars, but a weak one does. He should say that if the US makes clear that it will help Israel if it comes down to that, then Iran will realize that it must curtail its weapons program. In the meantime, Romney should stress the need to support the democratic opposition to the Ayatollah. If it ultimately has to come down to a war, better now before they have nuclear weapons than after they get them.

• Romney should attack Obama for failing to discipline China. He needs to explain that we sell only $50 billion to China and buy $400 billion from them (check numbers). With the rest of the world, we hold our own in trade. That’s because of currency manipulation. Obama is frightened that China will stop lending us money. But he doesn’t understand that China lends us money because they have to. The buy dollars and sell Yuan to keep the Yuan weak so Chinese products are cheaper in the US. Then what are they going to do with all those dollars? Bet them in Vegas? They buy T bills with them. That’s all they can do and that’s how the lend us the money. If they stopped manipulating, we wouldn’t need their money because we’d have an even balance of trade with the. By 20-75 voters do not believe Obama has been tough enough with China and most see fear of their no longer lending us money is the reason.

• Romney should attack Obama’s advocacy of an 80% cut in our strategic arsenal with no reciprocal cuts from Russia or China. By 22-64 voters oppose Obama’s position.

• He should go after Obama for cutting American defense spending too much. By 32-58, voters believe the cuts are “way too deep.”

• Romney should press Obama about what he meant by giving him more space with Russia after the election. Most likely, he was referring to a commitment by us that we would not orbit anti-missile satellites, a key concession which would make Iran and North Korea even more dangerous.

• Romney should attack Islamic fundamentalism for its attitude toward women and criticize Obama’s political correctness and refusal to face up to the threat it poses. He should, for example, criticize him for removing any references to Muslim extremism from FBI training manuals and his firing of good conscientious FBI agents for being Islamophobic.

These are the milestones to a successful debate.  (Published on dickmorris.com, October 19, 2012)

All about Bob.  The Bias of Bob Schieffer – Top 7 Moments  “Schieffer has steadfastly refused to acknowledge his biases over the years. But his words below speak for themselves. Can he contain himself tonight? Like Crowley, he’s signaled to the media that he will “interject” himself to stop candidate “filibuster[ing]” when necessary.”

Gee….could this be a blatant attempt to skew the election?  US Officials Say Iran Has Agreed To Nuclear Talks  “Iranian officials have insisted that the talks wait until after the presidential election, a senior administration official said, telling their American counterparts that they want to know with whom they would be negotiating.”  And:  Iran Deal The October Surprise?  “Will Obama announce a deal with Iran for a moratorium on the enrichment of uranium in return for the dismantling of some of the international sanctions against the regime? And will the announcement be timed to appear just before the election?”

Gee….ya think the US press would give Romney a pass if this were his campaign?  Obama Campaign Accepted UK Donation  “President Barack Obama’s online donation site has accepted illegal donations from a foreign citizen, while Gov. Mitt Romney’s site rejected a donation from the same man, according to a New York Post article.”

Gee…could the Obama administration have known a lot more about the Libya attack than they’ve admitted?  Unmanned Drone Observed Benghazi Terror Attack, Did Nothing  “As the details of Obama’s cover-up slowly trickle out, we get the feeling by the time this is all done with we’ll find out Obama himself was personally observing the action in between fundraisers. Now we discover we had drone surveillance of the attack as it happened and did nothing. Maybe we were concerned about innocent civilians protesting a video getting hurt.” 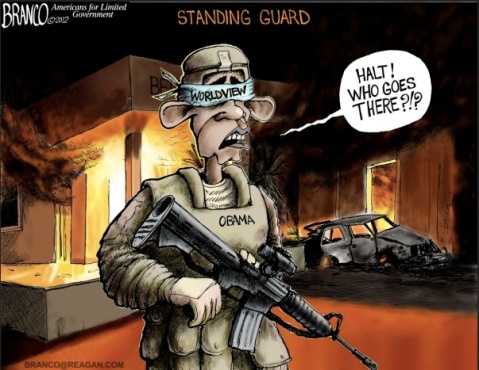 Final Thought: “We need a foreign policy that distinguishes America’s friends from her enemies, and recognizes the true threats that we face.” Sarah Palin

GOD BLESS AMERICA – PASS THIS ON – REMEMBER IN NOVEMBER – 15 DAYS AND COUNTING!!