ALOHA, ALL!!  Another one bites the dust.  So how many of these “Green” companies have gone bust?  I can’t keep count anymore.  There was Solyndra and recently Dirty Harry Reid’s pet project near Las Vegas, Amonix.  Now this one – Abound Solar.  Here’s a list as of April 2 – add at least two more:  Solargate:  Solar Companies That Have Gone Bankrupt  BTW, I think Darrell Issa is the hardest working person in Washington!

Your Friday LOL moment:  “I would wake up every single day, every single day and spend every waking hour thinking about you. Fighting as hard as I knew how for you. Because I see myself in you.”  Yeah – he’s “focused like a laser beam” on jobs.  HA HA HA!!

How nice!  He thinks of us every day while doing this: 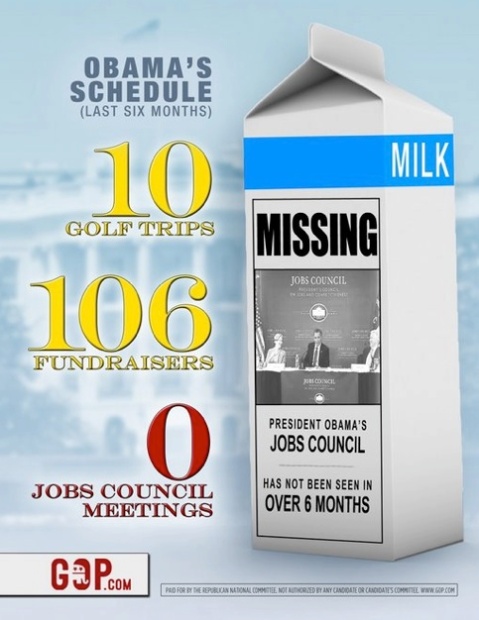 ICYMI:  TSA Let 25 Illegal Aliens Attend Flight School Owned By Illegal Alien  “We have cancer patients, Iraq War veterans and Nobel Prize winners all forced to undergo rigorous security checks before getting on an airplane,” said Rogers, “and at the same time, ten years after 9/11, there are foreign nationals in the United States trained to fly just like Mohammed Atta and the other 9/11 hijackers did, and not all of them are necessarily getting a security background check.”

I used to like Megyn Kelly.  But I’ve had it with her.  The other day she said she wasn’t “sure” about how the 71-year-old guy had fended off attackers at an internet cafe with his gun.  Now, she’s condoned racist Jehmu Greene by continuing to have her appear on her show, even after Greene made a blatant racist comment about Tucker Carlson being a “bow tyin’ white boy.”  Great overview by Mychal Massie:  Is Jehmu Greene Worth It To Megyn Kelly And Fox News?

Love this photo from Jacksonville, FL!   It greeted Obama during his visit there yesterday 🙂

BLOCKBUSTER New Romney ad!  Interesting how Barry *hearts* all these dead-end green businesses but slaps the REAL job creators in the face.  I just saw the business owner in this ad, Jack Gilchrist, interviewed by Neil Cavuto.  Great guy!  I think the owner of Pro Deck in Columbus, Ohio needs to do one of these ads 😉

This is just plain weird.  Obama Photo Forgery  “The Black male hand under Obama’s right armpit does not match Dunham’s right arm and there are many other photo anomalies.”  I went to the Barack Obama Facebook page myself and sure enough, there was the photo.  I wonder how much longer it will be there?? 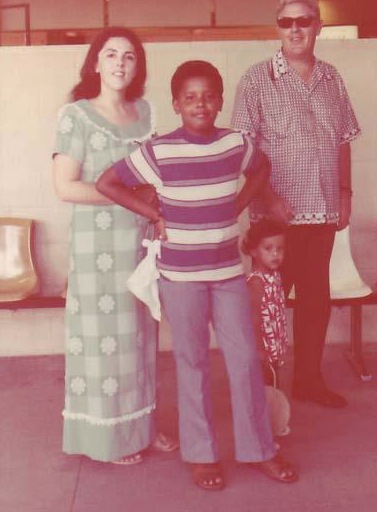 Final Thought:  “…We’ll invest in biomedical research, information technology, and especially clean energy technology – an investment that will strengthen our security, protect our planet, and create countless new jobs for our people.” — Barack Obama on green jobs, 2011 State of the Union speech

GOD BLESS AMERICA – PASS THIS ON – REMEMBER IN NOVEMBER – 108 DAYS AND COUNTING!

ALOHA, ALL!!   Have you noticed how the Democrats are suddenly and mysteriously silent about gun control lately?  While there was some chatter after Gabriel Giffords was shot, they haven’t said a word especially in light of the school shooting in Ohio.  What gives?  Have they suddenly realized that  the Second Amendment gives us a constitutional right to bear arms?  Don’t hold your breath – it’s merely a political move.  It seems that more and stricter gun control measures are less popular than ever.  Has Fast & Furious turned around and bitten them in their despicable okoles?  Some stats:

So the Democrats realize that pushing for gun control is a LOSER issue for them heading into November.  Which is exactly why the Republicans should seize upon it.  Here’s a great, no-nonsense commentary:  The campaign dog that hasn’t barked – yet | Conservative Outpost  Summed up in a couple of sentences:  “Remember, issues win campaigns. And the fact that Democrats aren’t talking about guns means that they don’t want to. Make them.”

Where has all the ammo gone?   This notice appears on the site Georgia Arms   It seems Obama and the Democrats have been good for business.  In fact, sales of guns and ammo have been at high levels for the past three years.  Have you bought yours yet?   Gun Sales In America Soar … AGAIN   (Shaka to Lee for the links)

One of the best ads I’ve seen in a LONG time!  (Shaka to Dick for the link)

Harry Reid Reverses Course on Judges; Political Stunt Backfires  Ha Ha!!!  Harry needs to go back to Nevada and his pomegranate trees.  “Reid, hoping to paint Republicans as obstructionists on judges, held up passage of the House-approved JOBS Act. Reid charged that the minority had “refused to allow us to even vote” on nominees and “prevented the Senate from doing its constitutional duty.” But those bombastic claims were easily dismissed by a quick review of history.”

Jim Belushi Raises Money for Obama, Castro | FrontPage Magazine  Bye Bye Belushi – I’ll never watch another one of your movies!  “As he chummed it up with regime apparatchiks in Cuba (where the average annual salary is $230), Jim Belushi was fresh from last month’s $38,500-per-plate Obama fundraiser in Beverly Hills where he shared the honors alongside George Clooney.”

White House-Backed Review of Energy Department Loans Omits Solyndra | CNSNews.com  They thought we wouldn’t notice???  Rand Paul grills this guy – be sure to watch the video.  “An “independent review” commissioned by the White House to evaluate loans issued by the U.S. Department of Energy did not include a review of DOE loans to failed alternative energy projects such as Solyndra and Beacon Power.”

"Honey, can you buy my pills for me?"

Sandra Fluke can’t afford contraception, but expensive trips to Europe… not a problem! | Liberty News Network  Knock me over with a feather.  She can’t spend $9/month on birth control pills but takes  trips to Europe with her boyfriend, Adam Mutterperl (turns out she’s not gay, I guess.)  What a fraud this woman is!!!  Be sure to check out the link for more pictures of their excellent European vacation.  “They recently traveled to Spain and Italy together.  It was a lovely getaway for the women’s rights activist and her rich socialist boyfriend. Here the two lovebirds are roughing it late at night in Barcelona – drunk.”

And there’s more….turns out the downtrodden Ms. Fluke traveled to Tuscany, Pompeii, and even Hawaii in the past couple of years!  She’s got it so tough being a poor law student. 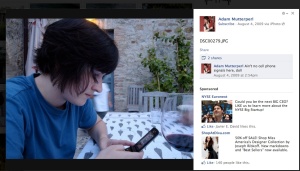 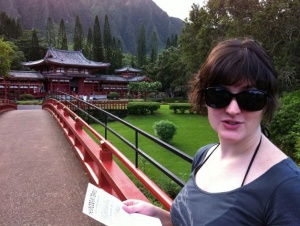 This Japanese temple is actually a stone's throw from my house. If only I had known we had such a distinguished visitor!

YES…ALL THESE PHOTOS ARE REAL AND EASILY ACCESSED ON MUTTERPERL’S FACEBOOK PAGE.  You think maybe he likes the publicity and attention?  Why else would he leave all these pictures there for anyone to see?  UPDATE:  MUTTERPERL HAS NOW MADE HIS FACEBOOK PAGE PRIVATE – but I captured these pictures before he did!  To read more about him and his wealthy socialist-leaning socialite Boston blueblood family, go here:  Sandra does Spain – Common American Journal

Final Thoughts (Lots of good ones so I picked more than one this time):

“The Second Amendment is the Equal Rights Amendment.” Jannalee Tobias

“An armed society is a polite society.” Robert A. Heinlein

“The great object is, that every man be armed.” Patrick Henry  (Dear Patrick – I would add “woman” too!)

OKAY…it’s Friday so here you go