Hump Day Report: The End of the World….* 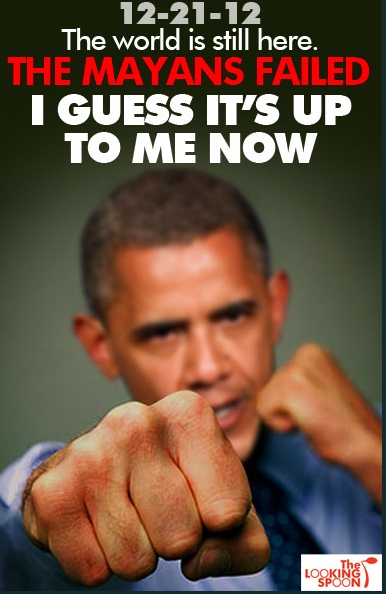 ALOHA, ALL!  All this talk about how the world was supposed to end today.  Now everyone is saying “NOT!”  But not so fast…our world is ending, maybe not in the physical sense but in the moral and philosophical sense.  How did the Mayans know the US would elect a president (twice) hell-bent on “fundamentally transforming” our nation?  How did they predict that he would succeed?  Fiscal cliff, decimated military, class warfare, lack of transparency.  Lies.  Lies.  Lies.  All these are the hallmarks of Obama’s presidency.  So even though the world is still turning, our world in the United States of America is turned upside-down.  And Americans feel fine.  Welcome to the new normal.  (P.S.  As I write this, just heard Dear Leader is speaking in about 30 minutes.  He’s SO awesome!!!)

The cliff gets closer.  Conservatives Stand Their Ground  “Lacking votes from his own party, Speaker John Boehner (R-OH) called off consideration of “Plan B” last night, sending lawmakers home for Christmas instead. When the dust settled, conservatives stuck to their principles: to cut spending without raising taxes.”

Have you heard of all the potential mass murders that were prevented….because of concealed carry?  Of course not.  You can read about them here:  We Know How To Stop School Shootings

Works for the Israelis.  NRA Calls For Armed Guards at Every School  “The only thing that stops a bad guy with a gun is a good guy with a gun,” Wayne La Pierre said. “I call on Congress today to act immediately to appropriate whatever is necessary to put armed police officers in every single school in this nation – and to do it now.”

Surprise, surprise.  Obama to Nominate Kerry as Secretary of State   “Obama praised Kerry, a former Democratic presidential nominee, as the “perfect choice to guide American diplomacy in the years ahead,” and heralded his service in Vietnam and the U.S. Senate.”  Barf.

There’s pork in there???  I’m shocked!  Amendement Cuts Pork From Hurricane Sandy Relief Bill  “Senator Coats noted that about two-thirds of Obama’s proposal, as packaged by the Appropriations Committee, is extraneous to the immediate needs of hurricane victims. The Senator’s $23.8 billion measure would strip out $13 billion in funding to mitigate the next potential storm, and also strikes all but $2 billion of an outrageous $17 billion Community Development Block Grant slush fund.”

*As We Know It.  Fitting theme song.

6 responses to “Hump Day Report: The End of the World….*”